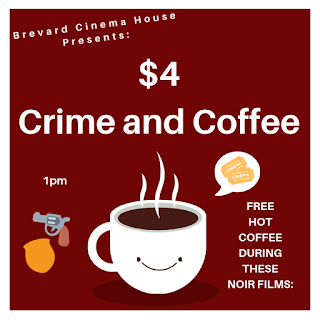 Enjoy a $4 noir film including free hot coffee at 1pm on the dates listed:

Ronnie Jackson (Bob Hope) relates to a group of reporters the events that lead to his murder conviction. Jackson is a San Francisco baby photographer who dreams about being a real private detective like his office neighbor Sam McCloud (Alan Ladd). One day he is mistaken for a detective by mysterious lady in distress Carlotta Montay (Dorothy Lamour), who claims that her wheelchair-bound husband was kidnapped at the pier as they arrived from overseas.

Christopher "Chris" Cross (Edward G. Robinson), a meek amateur painter and cashier for a clothing retailer, is fêted by his employer for twenty-five years of service.
Walking home after a party through Greenwich Village, Chris sees a young woman, Katherine "Kitty" March (Joan Bennett), being attacked and knocks her assailant unconscious with his umbrella.

Piano player Al Roberts (Tom Neal) is drinking coffee at a roadside diner in Reno, hitchhiking east from California, when a fellow patron plays a song on the jukebox that reminds him of his former life in New York City. He remembers a time when he was bitter about squandering his musical talent working in a cheap nightclub. After his girlfriend Sue Harvey (Claudia Drake), the nightclub vocalist, leaves to seek fame in Hollywood, he sinks into depression. After some anguish, he decides to go to California and marry her; but with little money, he is forced to hitchhike his way across the country.

A nameless, ruthless man who identifies himself as Mr. Big is timing to the minute the arrival of two trucks. He selects three men for the gang—the addictive gambler Peter Harris (Jack Elam) wanted for murder, gum-chewing thug Boyd Kane (Neville Brand) and the womaniziing Tony Romano (Lee Van Cleef). They will fit perfectly into Mr. Big's complex plan, which appears to be an ordinary robbery but is much more.
Location: 234 Willard St suite c, Cocoa, FL 32922, USA