Here is our next offering.  Come out & see Frank Sinatra as you've never seen him before-as a psychopathic villain!  An entirely different side of Ol' Blue Eyes (even though it is B&W you know they're so blue)! 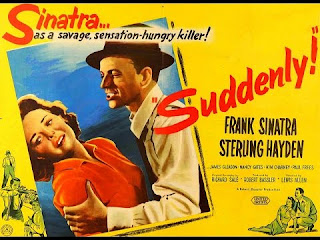 Suddenly is a 1954 American film noir crime film. The story concerns a small California town whose tranquility is shattered when the train of the President of the United States is scheduled to pass through the town, and a hired assassin and his henchmen take over a home as a perfect location to assassinate the president. The film was directed by Lewis Allen with a screenplay written by Richard Sale.